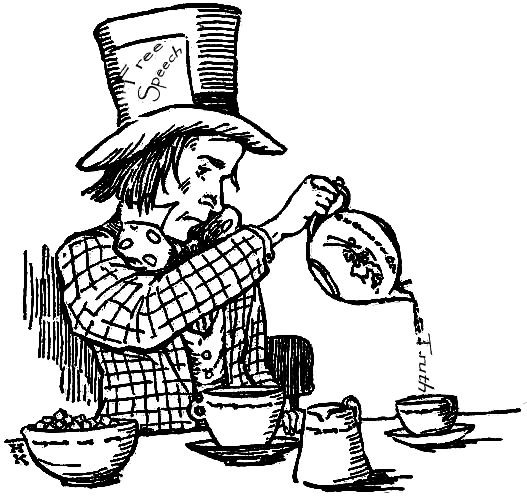 That isn’t the best question to ask your wife as you’re getting ready for bed, but I asked it as soon as I spit my toothpaste out. I had asked it half in jest—only half.

She said she wanted to get up an hour early to go put gas in the car—after she put $20 in the tank earlier that day, but, according to her, it was at the wrong gas station—and get a cup of coffee. I would have just tried to sleep that extra hour and not worried about it. Caffeine addiction is strong.

It’s little things like this that keep me interested. When the little things cease to be interesting, that’s when your relationship is doomed, or so I hear. Twenty years in and I still find them interesting—I’ll count that as a win.

She responded to my question with another question, “Am I insane? I’m not the one who designed a tee-shirt because they were insubordinate at work.” She didn’t say it with even a twinge of humor.

She’s right though. I did do that. She doesn’t find it as funny as I do.

Then she pointed out that I wrote blog posts and made stickers and buttons too, as if I were doubling down and not just poking a moose, but actively twisting its ear, and said, “Are you sure you’re not the one going insane?”

The whole situation is nebulous and complicated. I know she supports the assertion that public libraries should be a place where all citizens of a community should be able to see representations of themselves, whatever their age. I know she has the stance that the right to free speech and the freedom to read should be upheld by the library. I know that she thinks what I said was ethically defensible and morally just. I know she approves of me writing into the opinion section of the newspaper in response to the trustee who did the same thing. She thinks identifying myself as a library employee was the right thing to do. She thinks the library essentially telling me how I can deliver my thoughts and what disclaimers I need to include is ludicrous. She’s even told me that she felt my comments in the conversation with the administration were warranted. What I don’t think she’s entirely comfortable with is how far I might be willing to go.

I am wholeheartedly willing to lose my job over standing up for the First Amendment rights of the public I serve and my fellow employees. That is what she’s apprehensive about. She also knows it’s the right thing to do. I think that’s what scares her.

Her question made me do a brief self-assessment as I crawled under the covers. After all, you can’t fight insanity with insanity. If my wife is starting to question some of how I’m going about doing things, I should probably pay attention.

If you’ve ever encountered a moose in real life, you probably found the experience at least mildly interesting. I wouldn’t want a long-term relationship with one, but I’ve run across more than a few in my woodland wanderlust. Whenever I’ve come across a moose in the wild, they go about their own business and really don’t do much more than huff and acknowledge my existence. It doesn’t seem to matter how far away I am either—20 yards or 200 it’s pretty much the same. There have been times where I thought I could get away with sneaking up behind one and giving it a little poke while it absent-mindedly gnawed on its vegetables. It would be just like they were poked by a twig or something—they don’t have very good eyesight. But I don’t think twisting its ear would go over well. (For the record, don’t ever mess with a moose, they injure over six-hundred people in the United States per year and kill six—they are more deadly than black bears, grizzly bears, and wolves combined.)

They’re relentless too. It has been nothing but a constant barrage since trustee Ottosen put out her first call for those willing to assail the First Amendment rights of others to come and make their voices heard. They are more organized, more consistent with their message, and apparently more passionate about taking away the rights of others than the general population is about working to preserve those rights. That’s what got me started down this road.

The inaction of the library administration regarding the situation prompted me to speak out. Their subsequent rebuke against me exercising my First Amendment rights by asking me to omit relevant information regarding my employment status or including a statement they want to see (essentially putting limitations on my exercise of free speech) is what makes me question just how far the blight has spread. Librarians, of all people, should be standing up for First Amendment rights, not limiting the exercise of them. That’s what makes me think I haven’t gone far enough.

It’s often easier to stand against something than to stand for something. It’s easier to stand against the free exercise of speech, thought, and public discourse (especially if you are in the majority) than it is to stand for it. Those who want to see books and programs censored at the library are standing against materials and groups who, in their opinion, are corrupting. That is the danger of free speech; when you have it, all sorts of ideas enter the zeitgeist. A person who values free speech recognizes things they don’t agree with will enter the discussions in the public arena. It is through those discussions that we learn and grow as a society. We should stand for that right, not against it. We shouldn’t provide hemlock to anyone who has a dissenting viewpoint to create homogeny. We need gadflies.

I think it is fantastic that Trustee Ottosen can speak about what she views as her moral obligation in protecting others against what she views as corruptive influences. I think she’s wrong, especially in the context of the library, but I think it is wonderful she is allowed to respectfully express her opinion. I also think it was important for her to declare she is a library trustee because that is relevant information that the public should know. At the same time, I should have the ability to provide a personal rebuttal to her haphazard ramblings without fear of jeopardizing my employment or career.

Stickers, buttons, and tee shirts are small potatoes compared to what is going on.

My wife is right though. By doubling down I am being antagonistic. I am acting like a madman. I am actively jeopardizing my own interests for the interests of others—something the library administration is apparently unwilling to do, and I called them out for—but isn’t that what we’re supposed to do? Shouldn’t we be concerned with protecting the rights of others as well as ourselves? If you’re not willing to stand for something, by default you’re standing against it.

If the manifestation of insanity is doing the same thing over and over again and expecting a different result, maybe I am a little mad. Then again, I hear all of the best people are.