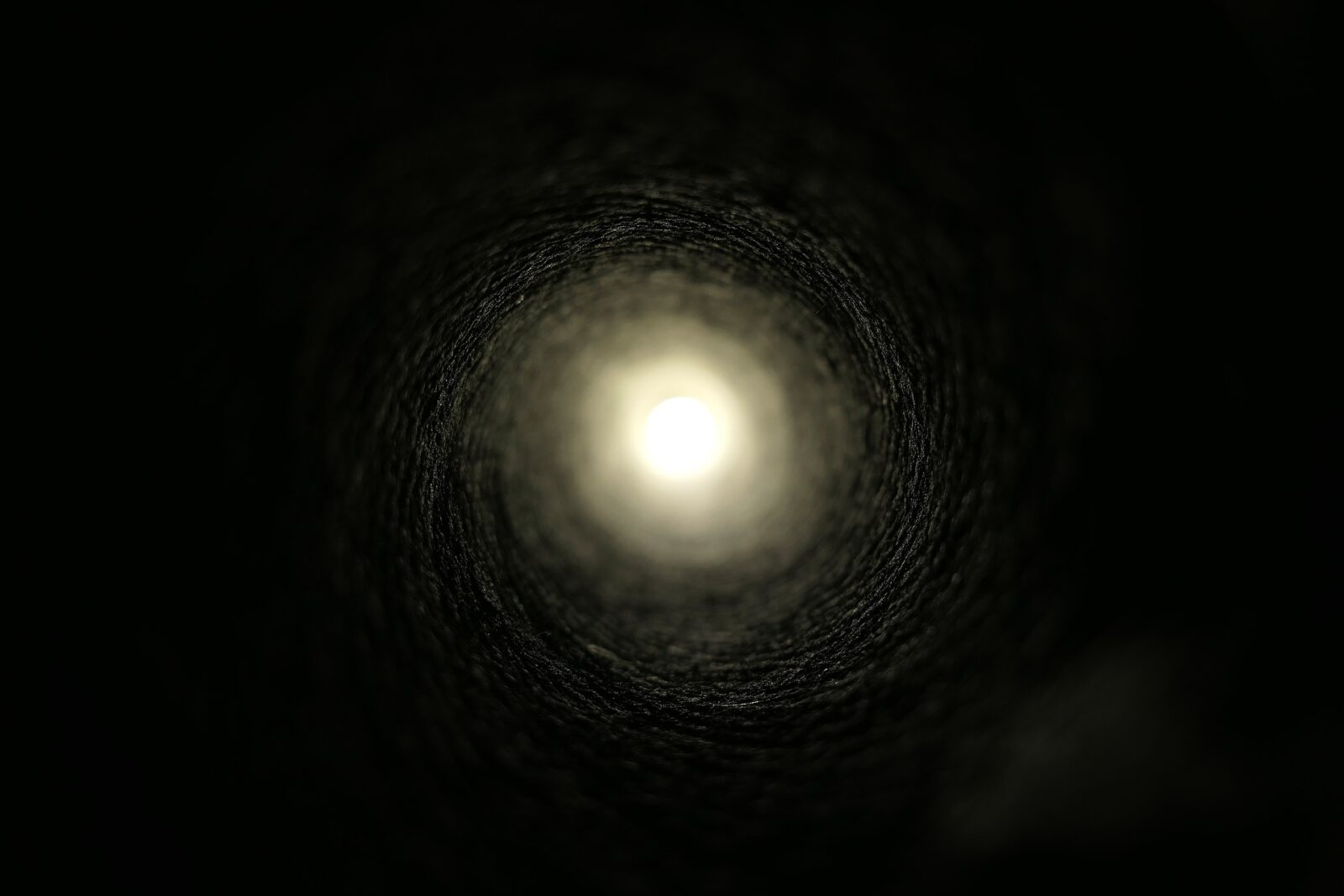 Three months ago I was invincible—the man destined to lead humanity to further greatness. Righteous. Infallible. Creative. Beyond reproach. The world was mine and I had the energy, drive, and desire to take it.

Today, I’m in a hole. A darkened pit of hopelessness that swallowed my self-worth. It continues to chew up pieces of me and, as a consequence, I lash out at those I’m closest to, inflating their small slights into grander insults designed to attack what is left of me. In my wake is a trail of desolation, loneliness, despair, and most of all—regret.

The regret doesn’t make the hole deeper. The floor stays where it is. Instead, another layer is added to the rim. The regret of your reaction to every little thing, no matter how insignificant, transforms into more blocks to add to another layer. The range hood over the stove doesn’t seem to take away the smokiness of the bacon—here’s a greasy block. Everyone leaves their shoes next to the door—six pairs of blocks. The dog leaves fur all over my chair—a furry block. Halfway through my shower, the hot water runs out—a cold block. It’s raining—a wet block. The car needs tires—four rounded blocks.

For all that’s left in my wake, I hold onto hope. I cling to it like a tiny captured ember. I curl up and gently blow on it, trusting it will be ready when a piece of kindling happens to fall into the pit. I hope those closest to me understand. I hope they won’t leave. I hope they know how much they help—even when I can’t show them that they are. I hope I don’t lose my mind.

People don’t talk about their mental disorders and it’s tough to explain what it’s like to have Bipolar Disorder to those who don’t experience it from the inside. I have periods that feel like they are the best day of my life and I can conquer anything put in front of me. They leave me exhausted but happy, energized but irritable, impulsive, creative, impatient, excited, restless, productive, engaged, and determined. I love the way I feel in those periods. They’re addictive. If I could choose to live in that space all the time, I would. But that’s not sustainable, and I can’t speak for everyone’s experience with the disorder.

For me, following those manic highs are the depressive lows. They never seem to end. They are prolonged stents in the pit. They carry with them a different kind of exhaustion, one born of desperation. I’m left feeling drained and irritable, lethargic, redundant, ambivalent, and useless. Projects and ideas that started during my manic highs get set aside and lost in the darkness, sometimes to never be picked up again. I often wonder how much more of a body of work I would have if I could find my way back to the myriad of unfinished things and complete them. That thought amplifies my sadness. When in the pit, I long for someone to throw down a rope, but I’m not entirely sure if I’ll tie a noose or bowline.

Ultimately, there isn’t any action anyone else can take to get you out of the pit. People can lower down ladders and they can throw you lifelines, but if you can’t seem to get up from your fetal position on the gritty bottom, their efforts won’t work. You have to ride it out. No amount of determination (if you can find any) will overcome the depression. It isn’t something you can will yourself out of. So you cling to your ember and hope that it will last long enough for the darkness to subside. You do your best to maintain an air of “normal” around other people in the grocery store, at social engagements, and at work. Maybe you even fool a few into thinking that you are—normal, that is.

The space between the low and the next high is where people without Bipolar Disorder live. People with Bipolar Disorder live there most of the time too. This is the “normal” space. There is a fine line between loving and loathing, and when it comes to this space, I walk the line. I love that I’m not in the pit. I love that I can function like most other mortals, that I can have conversations that aren’t loaded, that I can complete projects in normal timelines, that I can have a regular sleep schedule, that my kindness can come through, and that those closest to me don’t suffer. I loathe that I don’t exist in my manic space. I long to feel the river of creativity that comes in that phase, the unbridled confidence, and the feeling that you can accomplish anything (realistic or not.) The “normal” space is mundane when compared to the extremes—not that anything’s wrong with mundanity, for most people.

The second hardest part of having Bipolar Disorder is the unpredictability. I don’t know when the next manic phase is coming. I also don’t know when the depression is going to hit. After dealing with it for years, I can recognize some triggers, but even those are unreliable (and the phrase “trigger” has been politically charged by those looking to strip any humanity away from those dealing with mental health issues.) Dealing with that unpredictability in the context of a modern career is difficult, even when working for the most understanding of clients or employers. None of them want to hear, “I’m in a depressive phase of my Bipolar Disorder and can’t make it to work this week. However, when my manic phase hits, I’d be happy to work an eighty-hour week.” The world doesn’t stop because I’m not able to deal with it. Over eighty percent of people with Bipolar Disorder say it has had a negative impact on their work life. I have a manic and then a depressive episode, on average, about once a year. Each type of episode carries the potential to help me ruin a career. Throughout an adult working life that’s eighty to one-hundred episodes I’ll have to navigate through. However, the second hardest part doesn’t compare to the hardest part.

The hardest part, at least for me, is the toll my disorder takes on those closest to me. When it comes to them, it isn’t just “my” disorder. It affects them too. They never know when I’ll turn. I see them watching for queues in my behavior—like I’m some sort of experiment or mechanical device waiting to go off, especially if I haven’t had an episode in a while. Unfortunately, they’ve learned to adjust what they do and how they interact with me as I go through the different phases of my disorder, an extra burden they shouldn’t be saddled with. I’ve been told my perception of how things transpire is amplified and my words can be particularly harsh. It isn’t fair to those closest to me and I constantly wonder when one of them is going to decide they don’t want to deal with it anymore. If they all decide that, I’ll be alone. I know that’s a selfish thought to have, but who wants to be alone?

There are treatment options out there, and they’re getting better every year. I’ve talked with my psychologist about them, but there are always trade-offs. Right now, pretty much every pharmaceutical treatment works by trying to level out both the highs and the lows. To someone who doesn’t have Bipolar Disorder that probably sounds reasonable. To someone who experiences those manic highs, it’s like telling them you are going to take away the best parts of their identity. That makes it a tough pill to swallow. There are plenty of people who swallow that pill, but for me, I haven’t reached the point where the benefit of being more leveled out outweighs the feelings I have going through those manic highs. One day they likely will, but they haven’t yet. I hope it doesn’t take me losing something I truly value to reach that point.

Meanwhile, I’ve spent time in cognitive behavioral therapy trying to understand how my experience with Bipolar Disorder manifests and techniques I can use to mitigate some of the negative aspects of its different phases. While you can’t think your way out of the extremes that the disorder causes, you can prepare yourself to deal with different aspects of those extremes. For example, you can adjust your schedule to be more consistent. I wake up and go to sleep at the same time every day (something my earlier career wouldn’t allow.) I added routines into my life—I go for a walk at the same time every day, I eat at the same time, and I work a consistent schedule. The consistency in these things helps me (and those closest to me) recognize when I may be shifting from one phase into another. For me consistency is key.

I also went all the way to China to study Taoism with Daoist masters. One of the main principles, in fact, the main principle, of Taoism is creating space to be able to seek balance. Integrating a philosophy into a mental disorder treatment plan sounds like a great idea, religions have been seeking to do this for millennia, but in practice, it’s harder than implied. That being said, some of the physical aspects I learned over there have been very helpful. Mindfulness meditation and kinesthetic movement does seem to help lessen the negative aspects of the extremes.

Before I get too far into tooting my own horn about how I deal with my Bipolar Disorder without the aid of pharmaceuticals, I have to disclose that these things aren’t always effective. They are probably—definitely—less consistent than modern medical treatments that have been honed and tested to get the correct cocktail for an individual dealing with Bipolar Disorder. Some of my actions in my last manic phase jeopardized my career and my current depressive phase has been really hard on my family. It’s a disorder and there is no cure. Everyone dealing with it has to find out what works for them and even things that work most of the time don’t work every time.

As I wrap this up, I think it’s important to point out that sometimes things are out of our control. I can’t always control how my Bipolar Disorder manifests; however, I do always take responsibility for it. I try to recognize that other people have similar situations with other things in their lives. An addict can’t always control their addiction, they can take steps to mitigate it, and sometimes those steps work, but they have to take responsibility for it. A mother can’t always stop their toddler from throwing a fit in the middle of a library, but they have to deal with it. A fisherman can’t control the tides, he has to work within them, but he still has to bring home a catch. When things exist that we can’t control, we as people do our best. Most of the time we make it through okay, other times we get a few bumps and bruises, and sadly, sometimes we don’t make it at all. Keeping that in mind, we can all do our best to provide each other a little grace as we try to navigate through this shared experience we call life.